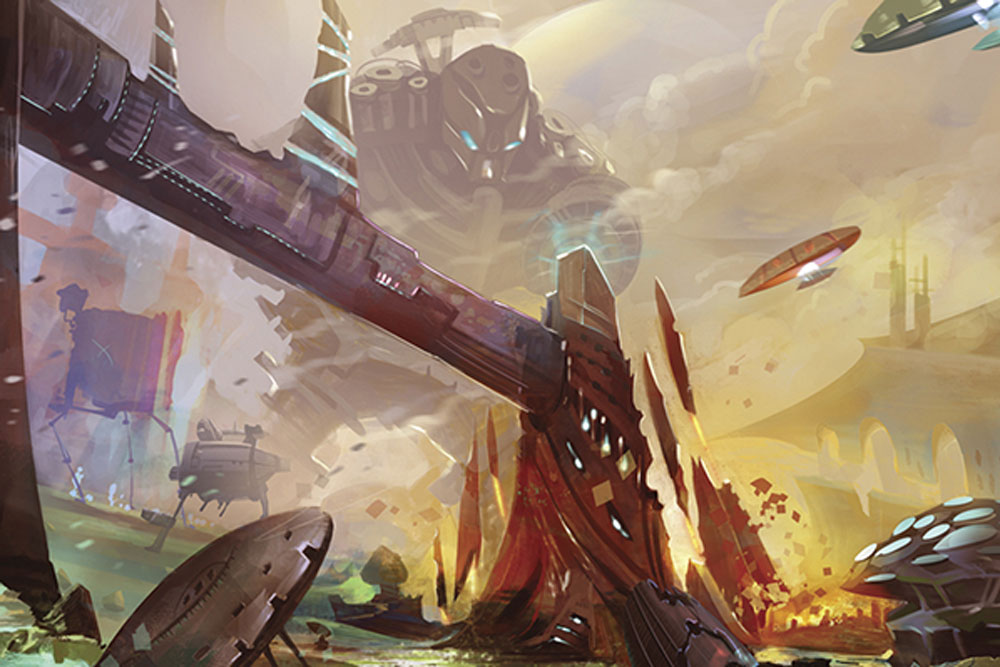 UFOs have been prominently featured in science fiction for well over a century.

For example, the invasion of Earth in Battlefield Earth, by L. Ron Hubbard, started when a UFO suddenly appeared at an altitude of 30,000 feet over London, without any trace of where it came from.

The UFO turns out to be a drone from the planet Psychlo. But, unusual for SF, the ship did not fly here under its own power by either a hyperspace shortcut or faster than light (FTL) travel.

Instead, the mode of transportation that brought the UFO drone to our skies was interplanetary teleportation, the Psychlos’ most advanced technology.

Fighter planes from Norway attacked the Psychlo space ship. The Psychlos did not fight back: They didn’t have to, because we hit them with everything we had without the slightest evidence of damage. Even nuclear weapons had no effect on the Psychlo UFO.

A scenario of Earth fighter planes and nuclear weapons being ineffective against an invading UFO was central to the recent Independence Day movies.

But long before Independence Day and Battlefield Earth brought UFOs upon us, J.H. Rosny Aíné’s The Shapes (1887) featured aliens that came to Earth in UFOs “a thousand years before the beginning of that center of civilization from which Babylon” was later to spring.

Perhaps the most frightening UFO tale was H.G. Wells’ The War of the Worlds (1898), which terrified Americans when they thought an Orson Wells 1938 radio broadcast based on the SF novel was a real alien invasion from Mars.

A similar theme of malevolent aliens was central to the 1950 Damon Knight short story, “To Serve Man,” made into a widely watched Twilight Zone episode.

The plot: Giant aliens, about the same height as the 9-foot-tall Psychlos, come to Earth offering to share with us the benefits of their advanced technology.

They carry with them a book whose title, translated into English, is To Serve Man—reinforcing our belief that their mission is altruistic.

Our perception alters when a linguistics expert translates the rest of the book. “To Serve Man—it’s a cookbook,” she tells a colleague as he boards the alien ship for an exchange visit. Of course, he’s there to be dinner. In the 2002 Mel Gibson movie Signs, the aliens also arrive in ships to catch us and eat us.

In the 1982 SF movie E.T., an alien botanist arriving on Earth in a UFO to collect plant samples is accidentally left behind by his crew mates.

An Earth family finds and befriends him, naming him E.T. after a sound he makes when trying to speak (and of course E.T. stands for extra-terrestrial). Eventually E.T. constructs a home-made communicator, notifies his ship of their error, and is picked up at the movie’s end.

Several nonfiction books have been written claiming that a UFO crashed in Roswell, New Mexico in 1947.

The authors also claim that the government recovered the spaceship, the dead bodies of the alien crew, and one live alien (although he lived only a short time)—and that they have maintained a cover-up ever since.

The Roswell incident inspired the Men in Black (MIB) films, which posit that a small number of extraterrestrials have been living on Earth for decades.

The MIB agents, Will Smith and Tommy Lee Jones, are responsible for policing the activities of these aliens and keeping the general public from learning of their existence.

Known for his fast-paced, well plotted stories that combined exciting soap opera drama with a solid hard science background, within the UFO sub-genre of SF, Mr. Hubbard was not a follower but an innovator—which in part accounts for his phenomenal success as one of the bestselling science fiction writers of all time.

In most UFO stories, the flying saucers find Earth on their own while roaming across the galaxy. And when they find us, they are decidedly hostile for one reason or another.

For instance, in Clifford D. Simak’s 1961 short story “Shotgun Cure,” Harry Herman is an alien whose race has sent him to Earth with a gift for mankind: a vaccine that will eliminate all disease.

Unfortunately, the vaccine turns out to be a weapon: Instead of curing disease, it lowers human intelligence; Harry distributes it to all humankind to make us dumber, softening us up so we are easy to conquer.

In the 1951 movie The Day the Earth Stood Still, the aliens are dangerous but somewhat more altruistic. At least the aliens give us an ultimatum with a chance for survival: achieve planetary peace, get rid of nuclear weapons, and be allowed to live. Or refuse and we will destroy you.

L. Ron Hubbard has an even more innovative variation on the UFO theme: that we actually invited the aliens to visit us—even drawing them a map! Apparently it never occurred to NASA when sending out the Voyager probe that any aliens who accepted our invitation could either be friendly or hostile. And if hostile, they would be more technologically advanced than us and therefore capable of easily conquering our world—which is exactly what the Psychlos did.

The Voyager craft we sent to make first contact with aliens gave directions to Earth, showing exactly how to get here. Worse, the map was made of gold, and the Psychlos treasured gold more than any other element in the universe because of its rarity throughout the galaxy—and it was the gold they came here to mine.

Battlefield Earth was truly an original, fresh take on an old theme—UFOs. It was original and creative storytelling like Battlefield Earth that helped make L. Ron Hubbard one of the world’s most awarded, successful, recognized, and bestselling book authors ever published!

L. Ron Hubbard Predicted the Kindle–Nearly 25 Years Before Its Invention
Scroll to top