40 Years of Battlefield Earth. Why is it a Classic Sci-Fi Novel?

I am a big reader of science fiction. I love everything from adventure sci-fi to post-apocalyptic novels.

I have often been asked the question, “What is your favourite science fiction book of all time,” and without hesitation, I always respond, “Battlefield Earth by L. Ron Hubbard, of course.”  Then the follow-up question, “Why?” Now, I could simply say because it’s a great gripping story, an absolute page-turner that draws you in within a couple of chapters, and that it was written by a great author.

However, Battlefield Earth is more than that, much more, and here’s why.

It’s an epic story of humanity’s struggles against brutal aliens who a millennium past conquered and annihilated Earth which is now a post-apocalyptic wasteland where the few humans remaining are hunted for sport. The story is set in the year 3000, where giant aliens have all but wiped out the human race to mine the planet for its natural mineral resources, where only a few scattered human tribes remain hiding out in the wilderness. These few struggling tribal communities are barely surviving with the death-rate out-pacing birth-rate. If you have not yet read it, you can read the first 13 chapters or listen to the first hour free (it is a fantastic audio production).

Every classic story requires villains and heroes, and we are quickly introduced to both.

Our main villain is a giant Psychlo alien, an evil sadistic, despotic cunning Chief of Security called Terl, who cares only for profit at any cost. The protagonist is Jonnie Goodboy Tyler, who leaves his tribe seeking a better existence. He comes out of hiding in the hope of finding somewhere better to live and is soon captured. He is a strong character whose perseverance and integrity set him apart with more than just muscle.

So there we have it, hero versus the villain—so who will come out on top?

Well, you will just have to read the book to find out.

There are other characters brought in on both sides, each with a different side story. Yet it’s so much more than that.

As the tale unfolds, we delve further into the minds of the aliens and the desperate humans, and things are not all as they seem.

One of the things I love about science fiction is the idea of life beyond Earth. Space opera books take you to other planets, create various methods of space travel, and introduce characters from alien worlds.

In Battlefield Earth, you don’t get the intergalactic sense right away. It starts off like a space western with the aliens on Earth and humans who have fallen into a primitive state of survival. About halfway through the novel, the universe opens right up.

Through the use of advanced teleportation, you discover that the sadistic Psychlos have a stranglehold on planets throughout 16 galaxies—I am talking about a VAST scope.

The alien races have various metabolisms, languages, and physical appearances. L. Ron Hubbard must have had a ball bringing them all to life.

This is a massive book with over 1,000 pages in paperback format, and every page grabs your attention as one would expect from such a renowned classic science fiction writer.

There are engaging twists and turns with unexpected cliffhangers along the way that are technically superb and emotionally gripping.

The aliens don’t have it all their own way, even though they possess advanced technology and alien weaponry. However, when the remaining Humans are unexpectedly threatened by the betrayal of their own people, the story takes us down another path of greed and loyalty—or the lack of it.

A rebellion across the Psychlo Empire and its effects on Earth brings a surprising new riveting twist into this enthralling masterpiece of prose.

There are science fiction novels that have stood the test of time. These include books by famous science fiction authors like Do Androids Dream of Electric Sheep by Philip K. Dick, Ender’s Game by Orson Scott Card, Dune by Frank Herbert, Foundation Series by Isaac Asimov, 1984 by George Orwell, War of the Worlds by H. G. Wells, and many more.

Battlefield Earth stands among these as a must-read classic. Not only has it sold millions of copies worldwide, but it also continues to be relevant—timeless.

It is also a good science fiction story for young adults (I think most of us started to read science fiction when we were 12!). Parents or teachers looking for books like the Harry Potter series in terms of adventure, good versus evil, and one that will keep your attention, you can’t go wrong with this one.

As one would expect with all great books such as Battlefield Earth, it is currently available in Waterstones, Barnes & Noble, books shops, Goodreads, and to name a few, and of course at Amazon. You will find the original hardcover (a first edition!), quality and mass-market paperbacks, and eBook editions. There is also an incredible audiobook version that is over 47 hours. Wow!

Galaxy Press has all of these formats available on their website, and they also have CD and USB versions.

However, don’t forget your local bookstore, which will be happy to order a copy for you if they do not already have it in stock. I try to support independent bookstores whenever I can.

And remember, you can read the first 13 chapters or listen to the first hour free (warning: it is addictive).

And the newest deluxe edition has hand-written author notes and a rare media interview where L. Ron Hubbard discussed what inspired him to write the book, what message he hoped to convey, and the purpose of the genre. I love this.

In conclusion, in writing Battlefield Earth, L. Ron Hubbard created an epic masterpiece in one book, a science fiction classic that has already endured since its first publication in 1982, and it will continue to do so, great classic books always do.

The most recent edition was republished in 2016 by Galaxy Press with stunning cover art by Frank Frazetta.

This ambitious, thoroughly absorbing story has heroes fighting against seemingly vast, overwhelming alien odds and futuristic technology. These are real honourable men and women using their own determination, mental abilities, and fighting spirit no matter the gravity of the odds stacked heavily against them.

A true epic science fiction adventure that transports the reader somewhere else, scary and exciting, makes reading so enjoyable and worthwhile. 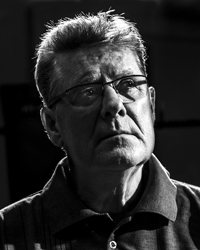 Grant Bremner was born in Scotland and spent his entire working life with the BBC in London. Starting in radio at the Broadcasting House before moving over to the Television Centre where he held a variety of positions in film and television. Due to a physical condition, he took early retirement and settled in Spain with his wife Sue. There he took up writing seriously. He won several prizes for his short stories, and began to write novels, including science fiction, mystery, and suspense.  His first novel, The Quest for the Holey Pail, is set within the boundaries of Chaotic Space where you can expect the unexpected. Since returning to the UK he has self-published many books, which are available on Amazon.

Sci-Fi Weaponry: Laser Guns to Planet Busters—How do they measure up?