Larry Niven was interviewed for the To the Stars and Writers of the Future Podcasts. Here are the highlights of the discussion about hard sci-fi with one of the great masters of the genre.

This article derives from an interview with my friends at Writers of the Future. It’s an informal look at hard sci-fi, that branch of science fiction characterized by concern for scientific accuracy and logic. It’s harder to write than fantasy, and of course there’s a broad, vague turf between them. I write SF as a vocation, fantasy as a vacation.

A writer needs to learn how to write stories that sell. A university degree in writing or literature is not required. I suggest you learn to write by reading the types of things you want to write that are popular.

When I started, I signed up with a mail-in correspondence course called “Famous Writer’s School” that I saw on the back of a magazine. I got through about two-thirds of that course. By then, I was already selling short fiction. It took me a year of full-time work writing and sending it in until Fredrick Pohl bought my first story.

I was lucky to have been born with a trust fund that saw me through this early period. Those who work a job or have other obligations might take 2, 3, 5, or more years.

You can submit to the Writers of the Future contest and join the community of writers. You’ll get to do plenty of writing, reading, and submitting, and you’ll rub shoulders with up and comers as well as masters of the trade. I became a judge early on to help new authors and to get a chance to read good new stories.

There’s an old tale regarding a contest run by the original Galaxy Magazine where nobody entered. They were too cheap. I suggested to WOTF that they make the award for winning worth it, and they have.

There are various views of the role of science fiction in the development of science. I have always been inspired by science and scientific methodology. Knowing how the universe works is key to my work. Good science fiction must have a plausible grounding in real science.

Hard science fiction must begin with hard science as currently understood by the culture and fans you are writing for. You’ve got to get the facts straight. The science of the day, the physics, the mathematics, the botany, and the technology that exists form the foundation. Science fiction DOES come after the fact of scientific discovery. We follow close behind the scientists, peering over their shoulders to see into the murky future; our advantage is that we’re allowed to make mistakes. We write knowing that our story might be obsolete tomorrow if the scientific community changes their mind.

If your story is not built on a plausible extrapolation or new discovery that somehow changes or advances the understood science, you will lose the reader. If it isn’t plausible, make it interesting, and you’ll get away with it.

I was working on a master’s degree in mathematics when I ran out of options and sat down to write. I was a daydreamer. I liked science and interesting things, but I did not have the focus for serious science and the years it can take to pursue some theory.

How Did You Come Up with the Idea for “Known Space”?

While mathematics itself hardly ever shows up in my stories, knowing how mathematics works, knowing how science works is key in my writing—all of my writing. I needed a mathematical and engineering background to write Ringworld. I had to design it. I’d read about Dyson spheres but was told that gravity generators were impossible. If that’s true, the only useful part of a Dyson sphere is the equator, where the air and oceans collect when you spin the thing.

I remember finding a math book in a friend’s library. It had just the formulas I needed to calculate the rotational velocity of Ringworld: 770 miles per second. You don’t want to mess up on basic stuff like that. It would be embarrassing.

Ringworld is for any reader of science fiction. It is an engineering exercise, an intellectual toy. I followed many engineering rules, but there are a few believable ‘cheats,’ with the strength of the material and the teleportation and faster than light travel.

I created planets in Known Space as exceptions to those in the Habitable Planets for Man (Stephen Dole).

For instance, I think I was the first author to write about a prolate spheroid world. Jinx, the massive moon of a gas giant orbiting Sirius, was forced outward into an egg shape, with surface gravity near the limits of habitability.

How Important Is Research in Your Story Development?

Knowing how mathematics and science work is a start. There is no finish, at least anytime soon. The more we know, the more we know we don’t know, and that is solid gold for a hard sci-fi writer.

The classic hard science fiction writers stick with facts as much as possible but will bend them for the story. You can get away with a lot here, provided you have a good story and a plausible transition to the fictitious science.

When L. Ron Hubbard wrote To the Stars in 1950, he tackled Albert Einstein’s time dilation theory and the phenomena of traveling at the speed of light. What space travelers would experience in terms of the vast time-lapse on Earth every time they traveled out the system—a barrier to space travel. In just a few days for them, years would pass on Earth.

Robert Heinlein in Time for the Stars brought the twin paradox to life with twins, one on Earth and the other traveling to the stars, able to communicate through telepathy. While it is real enough and he sticks to the facts as much as possible, the story moves into magic, as a ship could not accelerate that fast.

Even today, the Einstein theories prove to be right.

Credibility with your readers is essential. They are usually intelligent, creative people well versed in the science of their day. Your credibility with the important aspects makes the wonders of the universe you have created for them believable and a joy.

How Do You Handle Challenges to Your Science?

When The Integral Trees was serialized in Analog, I recall someone commenting that the trees wouldn’t get that big and they’d spin end over end. And he could prove it. I didn’t see his proof. I just took his word for it that I’d got it wrong. Now, I don’t know if I actually got it wrong, or he was just talking through his hat. I really don’t believe I got it wrong since I submitted all my designs to Robert Forward of Hughes Research and asked him if I was sane. He said yes and pointed out the wind speeds necessary to change the spoke trees into integral sign shaped trees.

I received correspondence from a school class in Florida who had used Ringworld as the basis for their work. It turns out I had left some things out. They suggested a basic problem of the ocean filling up with silt. So, I created a pumping system for Ringworld Engineers that solved that problem. I also added some attitude jets: fans at a WorldCon were chanting in the halls, “The Ringworld is unstable!”

I’m not the only writer who runs into these things. I remember the MIT people working on Mesklin, Hal Clement’s version of a very heavy planet spinning very fast in Mission of Gravity. The planet shape doesn’t come out as an ellipsoid of rotation as Hal theorized. It flattens into something more like a flying saucer. He got a lot of comments on that and, though he laughed about it years later, he often said you’ve got to get your science right. There is no excuse not to. Amen, brother.

“What it said might be invented, man then ‘invented’ and made real.”

What Books Do You Recommend for Readers New to Your Work?

I have written over 60 novels and 70 short stories. Every one of them would make a great movie.

Ringworld is for science fiction readers of all ages. It could be considered a ‘primer’ of my science fiction. A 5th-grade teacher once told me half her class was reading it.

The Mote in God’s Eye is my favorite collaboration. It is for science fiction readers.

The Integral Trees is for fans of harder science fiction.

Lucifer’s Hammer is more mainstream. It is my favorite for saving civilization.

The Magic Goes Away is for fantasy fans. What if magic were a non-renewable resource and faded away with use?

When Did You Feel Like You’d Made it—Like a Real Writer?

I have enjoyed collaborating with several great writers over the years. It is great to bounce ideas off one another and work out rough parts in the book. And it is not so lonely.

I would not recommend working with another author until you have become a good writer in your own right.

While Jerry Pournelle and I worked together, we explored territory in the Continental Divide for Burning Tower. Out on the trails, I felt like an honest to god writer.

We were once called into the studio where they were shooting the Watcher in the Woods. They had changed the story so much as they went along that they lost the ending. They had us watch the footage and then paid us a flat rate to come up with an end that would work. Jerry and I tossed around ideas over brandy snifters in his hot tub. That was when I really felt like a real writer. And, we came up with a great ending.

They didn’t use it.

What Is the Secret to Your Success?

I’ve been seeking wisdom since I started writing. As soon as I find an actual truth, I publish it.

I need a great concept to get a great novel.

Listen to the podcasts: 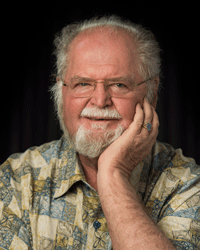 Larry Niven was working on his master’s degree in mathematics when he dropped out to write science fiction. He broke into professional SF writing in 1964 and has been going strong ever since. Now a giant in the world of science fiction, he is best known for his Known Space future history, a still-growing series of more than thirty novels and stories. The most famous of these titles, Ringworld, won the Hugo, Nebula, and Locus Awards. He later co-authored a series of novels with fellow WotF judge Dr. Jerry Pournelle, including the celebrated national bestsellers The Mote in God’s Eye, Lucifer’s Hammer, and Footfall.

Larry Niven received the L. Ron Hubbard Lifetime Achievement Award for Outstanding Contributions to the Arts in 2006. He has been a Writers of the Future judge since 1985.

Enter the Writers of the Future Contest

Improve your writing skill with the free online workshop

40 Years of Battlefield Earth. Why is it a Classic Sci-Fi Novel?