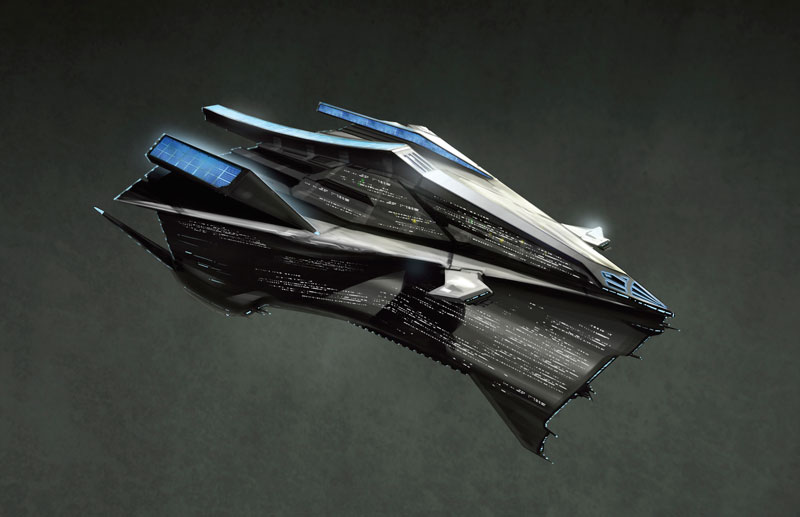 The bright and shiny Tolnep war vessel is marked with the diamond and slash insignia of the Tolneps. It is solar powered and has blast-tight bulkheads and a main battery of 64 Maxun blastcannons. With a crew of 524 Tolnep marines and 63 operating crew, it is commanded by a half-captain with autonomous authority over local tactical conditions but without authority over strategic decisions.

Running on the diamond-shaped bridge of every Tolnep war vessel is a hyper-nondirectional radio band, known only to the Tolneps, which cannot be picked up on any other radio except those used by flag officers and the diplomatic service. Additionally, the hyper-nondirectional transmissions are scrambled.

Ah, yes. He had half-expected this. A war vessel! There it was, settling into orbit near them. Bright and shining against the black sky. Always unnecessarily dramatic, these war vessels. Let’s see, diamond with a slash, the insignia of the Tolneps. He had wondered when they would arrive.

He flittered a rolling, lighted list in a round indicator on his desk. Tolnep … Tolnep war cruisers … did that one out there have a diamond-shaped bridge? Yes … Vulcor class. Vulcor … specifications … ah, here it was. “List weight 2,000 tons, solar powered, main battery 64 Maxun blastcannons …” How dull these endless specifications, who cared about the number of blast-tight bulkheads … ah. “… complement 524 Tolnep marines, 63 operating crew …” Goodness, wouldn’t one think that the computer clerks would realize the important items one would really want? “… commanded by a half-captain, autonomous authority over local tactical conditions but without authority over strategic decisions”! (Part 21, Chapter 1 Battlefield Earth)

Discovery of the Underground Base
Scroll to top