This is the second in a series of articles by Dr. David Powers. His first article was “The Short History of the Birth of Sci Fi”

Science fiction is often unfairly compared with fantasy books for educational uses. This is a weak analogy because the two genres are so very different. The two are only related in that they both fall under a larger genre known as speculative fiction and are found in the same section in bookstores. A thorough discussion of the science fiction genre was presented in a previous section, but a short definition of it would be that it features a reliance on technology, and, specifically, technology that is more advanced or futuristic than the time period of a work’s setting.

Fantasy is described as “a fiction genre set in an imaginary universe, often but not always without any locations, events, or people from the real world. Most fantasy uses magic or other supernatural elements as a main plot element, theme, or setting. Magic and magical creatures are common in many of these imaginary worlds.” There are several fantasy books commonly found on required reading lists and they are wonderful books, but the books aren’t the problem. It is the comparison of the genres that presents the difficulty. Two of the most popular required reading books are The Hobbit by J.R.R. Tolkien and Harry Potter and the Philosopher’s Stone by JK Rowling.

Fantasy works are excellent educational resources for literature, but they can only go so far. Science fiction has a much broader reach as a holistic educational asset and goes much further to bridging the gaps between literature and other subjects a typical student would study. For instance, The Hobbit could not be seriously applied to science at all. However, there are innumerable ways that science fiction works can be used to teach science.

Science fiction presents a notion of what could become possible given time, ingenuity, and technology. Students can study it from that perspective. In fact, it is common for professional scientists to study possibilities found in science fiction works. NASA published an article in 2016 that examined many of the innovations and technological advancements found in Star Trek and rated them in order from the possible to the incredulous.

Near the possibility end of the spectrum was…

Entire websites, books, and research studies have been presented by reputable scientific sources and government agencies detailing possibilities and successes in inventing technologies from Star Trek and other science fiction resources. There is no reason that students can’t explore the themes with their own studies in various sciences and math. Of course, language arts and literature are the easy subjects to approach with a required reading book, but it doesn’t necessarily need to stop there.

Just think how amazing it would be for a high school student to be the first one to crack the technology of an effective matter-antimatter engine, or, in the case of Battlefield Earth, a mind-expanding knowledge machine, which would surely be a hit among the student population who hate studying. In fact, a recent movie MindGamers, starring Tom Payne, is about a computer that transfers abilities and knowledge from one person to another.

Although many teachers might gravitate quickly to only using fiction to teach literature, Battlefield Earth is unique in its position as a hard science fiction novel that takes place on Earth. Consider these words from Diego Martinez, a Colorado Lockheed Martin Science Teacher of the Year winner…

I have used Battlefield Earth as a resource for my students over the years. Granted the size can be daunting for some, it is a perfect tool to get teens thinking. I found students who thought they did not like to read, become addicted to the end. As the book is laid out in short chapters, students can confront them one at a time. Before they realize it, they are involved in the story. It is engaging.

I originally read this book when I was in college myself.  It was an inspiration. The number of scientific inventions to be created provide exciting possibilities for any budding scientist. Materials that are thought to provide, engaging and scientifically inspiring are what I need. Battlefield Earth is a winner.

I have delivered seminars on the value of this novel to science teachers, who have gone on to use this work to inspire their students.

Science Fiction has long been a valuable resource for science. This book reminds you how much fun that can be, and yet vital to fueling mankind’s progress through valuable and practical science.

Sandra Girouard, a mother of three teenage boys, homeschool teacher, and author of The Worthier Part blog at sandratwp.com used the book extensively in her curriculum…

I will admit it right now – part of my growing enthusiasm for this book is rooted in all the teachable moments. When Johnny is exploring the ruins, he’s trying to figure out what everything is with no frame of reference (isn’t that what archaeologists do?). Later, when Johnny and a large group of people set off to work on a large project, a professor insists on accompanying them to create a details and accurate written record (history!). Later in the book, Johnny and others spy on aliens, watching them build circuits and trying to replicate them (STEM!). I could go on…

Oh! The mathematics. There is an entire section where various characters (human as well as non-human) communicate and sort out issues in mathematical systems using base 10 and binary systems…and even a base 11 system! (Sorry, my inner math teacher just got carried away).

After some thought, I decided that Battlefield Earth also is a great motivator for STEM learning. Really! Once Johnny acquires some really basic skills (including reading and writing), he’s put to work running mining equipment. As his understanding of what he needs to do to break free of the occupying forces grows, he seeks out additional knowledge. A key plot point hinges on when – or whether – Johnny will be able to figure out how to build a particular circuit. As much as my boys enjoy tinkering with circuits, there’s just something so much more exciting about a hero in a book using it to save the day (and especially when he’s using it in a way that we can relate to in our current culture of technology). Want to get your kids excited about STEM? Battlefield Earth would give you the talking points to bring up with your kids… but you won’t need to. They’ll already be talking about it.

Based on my own ideas and those of other educators it would seem that the only reason a teacher wouldn’t be able to integrate Battlefield Earth into the teaching of subjects other than literature is because they haven’t looked into it yet.

The fact that it can be used to teach so many subjects opens up innumerable opportunities for cohesion between subjects for students. This would help reverse the trend of teaching all subjects as if they are standalone courses that don’t have anything to do with others. This flies against real life where we all know that we are apt to use vast types of past knowledge at any given time. A weekly task as simple as doing my family’s bills integrates math, economics, accounting, government, and small business skills. 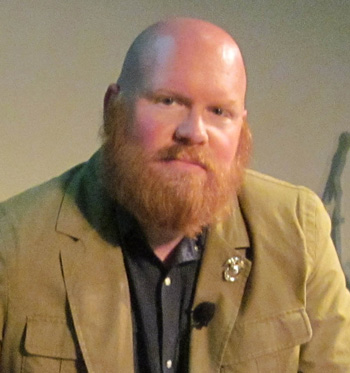 Dr. David Powers is an adventurer, philosopher, and pioneer. He is considered an expert in team building and goal setting and having perfected these skills in life-threatening situations, now teaches them in conferences and other settings. He is a best-selling author in cognitive psychology and experimental education. He is a decorated veteran of the Marine Corps and a founding member of the U.S. Department of Homeland Security. He is married and the proud father of four feral boys and one princess that he and his wife homeschool. His mission in life is to find the magical best mug of coffee in the world.

Aside from his academic and vocational pursuits, the author is a premier expert in pop culture and often conducts seminars on the intersection of pop culture fiction and real life.

Be sure to check him out at CallSignRedbeard.com.