“Man is an endangered species.” It’s the first line of L. Ron Hubbard’s masterpiece, Battlefield Earth. And it is Terl, an extraterrestrial (a Psychlo), who makes this statement. In this case, an alien invasion of Psychlos nearly wiped out humanity. If you have not read it, you can read the first 13 chapters for free (or listen to the first hour).

But is this true? While there are seven billion people on the planet, how safe is humanity? How likely is it that the entire species could become extinct? We are confined to one lonely planet. And it certainly seems like we have some real challenges to the future survival of our species. We face a long list of possible dangers. A virus could wipe out much of the population. A meteor could strike the planet. A super-volcano might erupt. Or we could destroy ourselves with nuclear weapons. Not to mention pollution. And of course, as in Mr. Hubbard’s story, there could be an alien invasion.

As everyone knows, truth is sometimes stranger than fiction. And sometimes, as in this case, they might be one and the same.

Aliens invading Earth may sound like science fiction. But what if it’s true? What if we are being invaded? Right now?

Many sci-fi writers have envisioned how extraterrestrial (ET) contact with humanity would occur, however, many people today believe it has already happened. Evidence from hieroglyphics, cave paintings, petroglyphs, Roman manuscripts, medieval woodcarvings, paintings from the Middle Ages, and more show us that UFOs and aliens do exist and have probably been around for centuries.

However, the idea of extraterrestrials didn’t enter public consciousness until the late 19th century. Science fiction writers like H.G. Wells, Jules Verne, and others were among the first to introduce the concept of aliens from other planets to mainstream society.

While UFOs were apparently visiting humanity regularly, it wasn’t until the Modern Age of UFOs began with the Kenneth Arnold sighting and the Roswell UFO crash in 1947 that the idea of alien invasion became popular. Since then, reports of metallic, disc-like craft have been seen in large numbers across the globe. What started with distant UFO sightings soon evolved to landings and contact with humanoids. Before long, people started to report alien sightings and abductions and UFO crash and retrieval incidents.

While some people remain skeptical, the evidence for UFOs is compelling. Beyond multiple eyewitness testimony, there are radar-return cases, photographs and films, landing trace accounts, metal fragments, medical effects (both injuries and healings), animal reaction cases, electromagnetic effects on machinery, even implant removal cases. And of course, there are thousands of pages of government documents from numerous U.S. intelligence agencies (and other governments) that betray not only an interest in UFOs, but an official policy of secrecy. The UFO cover-up is not speculation: it’s a demonstrable fact.

The point is, the evidence is showing us proof of aliens and that UFOs are real. The alien invasion has already taken place. Which means that many of the alien sightings and people who claim to be taken onboard and meeting aliens face-to-face are telling the truth. Which brings us to the aliens.

A Warning for Humanity

According to the 1992 Roper Poll by the Bigelow Holding Corporation, about 1 in 50 people may have experienced a UFO abduction. If true, that would mean about 140 million people have been taken onboard a UFO. Some researchers think it may be even more common. Thankfully, the experience appears to be mostly benign, though sometimes terrifying and painful.

Alien races may not be like sci-fi aliens, abductees typically describe them as humanoid figures, such as alien grays, mantids, human-looking ETs, and more. The ETs tell people, “Do not be afraid. We won’t hurt you.” People are then physically examined and let go. Often the experience is shrouded in amnesia or missing time.

In some cases, however, ETs have messages for the abductees. In case after case, the messages are almost always the same. UFO abductees are warned by ETs about nuclear proliferation, war and greed, pollution, and the future of humanity. They are warned about the destruction of our environment and that we are in danger of destroying ourselves. The same message comes from cases across the planet. Clearly the ETs are worried about our future.

“Virtually every abductee receives information about the destruction of the earth’s ecosystem and feels compelled to do something about it.… Scenes of the earth devastated by a nuclear holocaust, vast panoramas of lifeless polluted landscapes and waters and apocalyptic images of giant earthquakes, firestorms, floods, and even fractures of the planet itself are shown by the aliens.” —Abduction

“Images of mass destruction are extremely common during abductions—much more so than environmental images. Virtually every abductee has had to watch scenes of destruction. Tidal waves, floods, earthquakes, atomic bombs, and wars and their aftermaths abound. Devastated cities lie in rubble. Dead people are everywhere. Injured and dying men, women, and children cry out for help to the surviving abductee. Abductees are led to believe that this is going to happen, that it needs not happen, and that humans have caused it. The aliens sometimes suggest a way to avoid destruction. They are working to avert this unhappy scenario.” —The Threat

In Search of Aliens

My own research of alien abductions contains many similar examples. One such case comes from Navy medic Kevin Kammann, who was taken onboard a UFO where he met tall mantid-type ETs. At one point during his experience, the ETs showed Kevin a series of future natural disasters that would occur on various locations of the planet, all on a vivid three-dimensional screen, as if he was actually there, surveying the scene from a window. “They showed me mudslides and volcanic eruptions, hurricanes and floods, and more hurricanes. These were natural disasters that were going to happen. ‘These are things that are going to come,’ the ETs warned me,” Kevin explained.

Another case comes from Lynnette. She has had repeated encounters with alien grays who have warned her that humanity is in danger. “You must tell people to stop eating animals,” the grays told her. “You must tell people that you are all interconnected. The power of intention is real. Thought is real. If you don’t stop putting out the greed and negativity you are putting out, you are going to kill your race.”

Lynnette was stunned by the message, but the being was insistent. “The power of intention is real,” he repeated. “Thought is reality. You must pay attention because you are going to do what we did.”

It appears that Terl may be right! Humanity, at least according to the ETs, is an endangered species. And we may be a worse threat to ourselves than any space alien!

Hopefully, we’ll listen to the warnings. And interestingly, many science fiction authors help popularize scientific advances and space travel, which could help distract us from further wars on Earth and even inspire scientific progress to prevent the global destruction.

“Science fiction does NOT come after the fact of a scientific discovery or development. It is the herald of possibility. It is the plea that someone should work on the future. Yet it is not prophecy. It is the dream that precedes the dawn when the inventor or scientist awakens and goes to his books or his lab saying, ‘I wonder whether I could make that dream come true in the world of real science.’”

“In 1945 I attended a meeting of old scientist and science fiction friends. The meeting was at the home of my dear friend, the incomparable Bob Heinlein. And do you know what was their agenda? How to get man to space fast enough so that he would be distracted from further wars on Earth.” 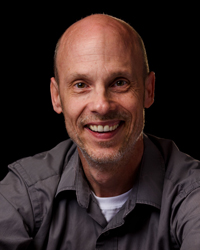 Preston Dennett is a UFO/Paranormal researcher and the author of 26 nonfiction books and more than 100 articles, including his latest, Onboard UFO Encounters. He is also an award-winning science fiction author with more than 38 speculative fiction stories published, including one in the Writers of the Future Volume 35. He currently resides in southern California where he writes about aliens both fictional and real.

Get your copy of Battlefield Earth:

Are aliens real and will they be friends or foe?

Is Earth prepared for an alien invasion? by Jim Marrs (author of Alien Agenda)

New to L. Ron Hubbard’s fiction? Here is the recommended order of books